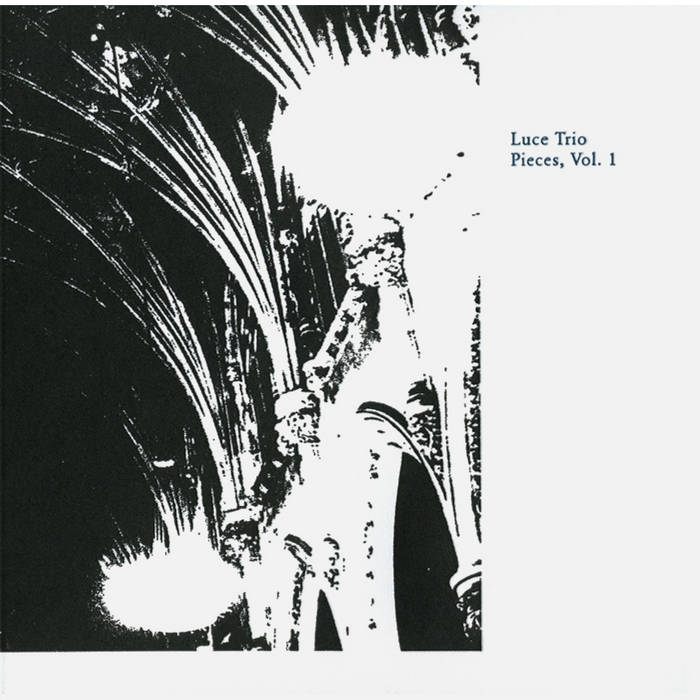 
“De Lucia’s alto has a lovely gentleness and liquid tone that is well matched by Ryan’s subtly adventurous line-cluster creating/part rendering and Tordini’s matter-of-fact yet essential lower end. It’s music that will wow you little-by-little. The music moves and so you are moved. A beautiful disk!”
-Gapplegate Music Review (full review: Gapplegate)

Pieces Volume 1 is the debut album of the Luce Trio, a group formed by saxophonist Jon De Lucia in 2010 to explore baroque and early music from a jazz improvisational perspective. The trio consists of De Lucia on alto saxophone and sruti box, Ryan Ferreira on electric guitar and Chris Tordini on the double bass. Hearing this music with the palette of guitar with effects, saxophone and double bass is unique and revitalizes the music, while maintaining the integrity of its form and character. De Lucia explains the concept:
The baroque era is known to have produced some of the greatest pre-jazz musical improvisers. So I thought, and there is a tradition of this in jazz, that we could bring improvisation into play while playing the music of Bach and Handel. The results have been exciting, challenging and very rewarding.

The album was recorded at St Ann and the Holy Trinity in Brooklyn Heights, a National Historic Landmark built in 1847. A frame of stained glass from the church is on display at the Metropolitan Museum of Art, as the oldest American-made figural stained glass in the country. This talismanic space infers an ethereal quality on the recording, a feeling of rarefied air and delicacy. The group hopes to record subsequent albums in this unique space.

The Luce Trio (pronounced loo-chay) got together in 2010, performing for the first time in Brooklyn in December of that year to an enthusiastic audience of 2. De Lucia was looking for a performance outlet for classical and early music, as it had been the major subject of his listening and practicing for the previous year. Vocal recordings of Handel and Bach arias were a major influence. Jazz musicians have performed Bach’s inventions and instrumental music regularly over the years, but much of the vocal music has been left to vocalists. It is there that De Lucia found melodies and harmony that seemed more conducive to improvisation and the sound of this band. After much rehearsal and a few more performances the group was ready to record this debut album. Interest grew enough in the band that they were able to successfully fund the recording through Kickstarter and record in November.

The album begins with the original Chant, a solemn invocation opening with the sruti box, a harmonium-like device that De Lucia operates with his foot while playing the saxophone. Ferreira, who is known for his ambient solo recordings, weaves in and out of the sustained drone, amplifying and intensifying it while Tordini guides the band with his arco work.

Chant sets the stage for the beautiful Handel aria, Lascia Ch’io Pianga, from the composer’s opera, Rinaldo. The meter and form have been adjusted but the essence of the song, title meaning “Allow me to weep…,” has been preserved. Solos by Tordini and De Lucia round out the performance.

Next is Passacaglia, another De Lucia original. The title refers to the classical form of a repeated bass line in ¾ time underpinning a melody that develops throughout the piece. Chris Tordini, a bassist known for his work with some of the most forward thinking modern jazz musicians, begins the piece a cappella. Guitar and saxophone play the melody together and the group gradually heads into total improvisation before returning to the simple ostinato in G major.

The melancholia of Elizabethan lutenist John Dowland is some of the most beautiful music to come out of that era, and perhaps the most famous of his pieces is I Saw My Lady Weepe, followed by Flow, My Tears. The Luce Trio attempts their own version, with saxophone replacing the counter-tenor melody. An artfully crafted group improvisation fills the gap between the two pieces.

After a faithful reading of JS Bach’s 3-part invention, Sinfonia 11, the trio launches into the canonical original Variations. Baroque harmonies lead into spiraling melodies from all members while the original melody is always present.

De Lucia wrote The Dinosaurs originally for a performance with slide guitarist extraordinaire David Tronzo and bassist Garth Stevenson. It has more of a folk character than the rest of the album, and is a band favorite.
The album ends with two pieces from JS Bach’s Cantata 159, Es Ist Vollbracht and the chorale Jesu, Deine Passion. An intro by De Lucia sets the tone, followed by a lesser known Bach tune, full of interesting twists and chromaticisms. The chorale resolves the dissonance and concludes the recording.

Ryan Ferreira is a guitarist involved with a diverse group of musicians in NYC. He has played with Alarm Will Sound, Aaron Parks, So Percussion, Cuong Vu, Antibalas, Jerseyband, American Contemporary Ensemble, Ralph Alessi, John Shannon, Bell, Superhuman Happiness, Qasim Naqvi’s Progressive Youth Club and Frantz Loriot. Ryan currently has duo projects with Carlo Costa, Garth Stevenson (5707), Loren Stillman (Elderflower), Joachim Badenhorst, Chris Dingman and Red Wierenga. Recently he completed the score for a short documentary, has been performing solo for yoga classes and has been working on the release of a few solo records.

Jon De Lucia is a Brooklyn based saxophonist and composer. Originally from Quincy, MA, Jon has become an integral part of the New York scene. Predominantly a student of jazz, he also has a deep interest in the folkloric music and instruments of Cuba, Japan, Ireland and Italy, having performed on a variety of ethnic flutes, drums and stringed instruments. Jon has led his groups and played as a sideman in Boston, New York and all over Japan with such musicians as Tommy Crane, David Tronzo, Bob Moses, Bob Gullotti, John Lockwood and Thomas Morgan among others. He leads the Jon De Lucia Group, and the baroque improvising Luce Trio. He continues to compose, perform and teach privately in New York City.

Thanks to our family, friends, and online supporters.
©Musæum Clausum Recordings 2012 www.jondelucia.com

The Luce Trio is Jon De Lucia’s baroque inspired group featuring guitarist Ryan Ferreira and bassist Chris Tordini. They perform pieces by JS Bach, GF Handel, John Dowland and more along with Jon’s original compositions.
The group recorded their first CD in November, at the St. Ann and The Holy Trinity Church in Brooklyn Heights. The CD will be released in July 2012. ... more

Bandcamp Daily  your guide to the world of Bandcamp

outré black metal, with a Victory Over the Sun interview and music from Liturgy and Jute Gyte.